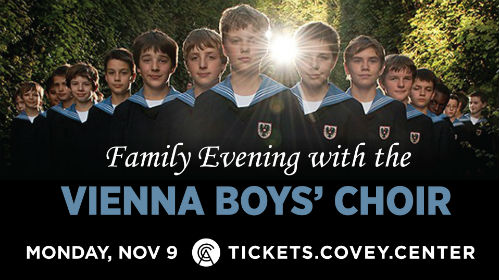 PROVO, UT: The Covey Center for the Arts welcomes the international sensation Wiener Sängerknaben (Vienna Boys Choir) for a night of spectacular music. This once in a lifetime concert is scheduled for Monday, November 9 at 7:30pm. The angelic voices of the Vienna Boys Choir are known all over the world for their distinct sound, long standing tradition, and expertise. The program, which includes songs from countries around the globe, is sure to delight audience members from every walk of life. Ages 6 and up are allowed with a ticket, which range from $30-40. Don't miss out-buy your tickets for this unforgettable evening now!

Vienna Boys Choir: The quintessential boys' choir has a long tradition. Boys have been singing at Vienna's Imperial Chapel since 1296. In 1498, Maximilian I (HRR) moved his court to Vienna, lock, stock, and choir. Over the centuries, the Viennese Court attracted musicians like Mozart, Salieri, and Bruckner; Joseph Haydn, Michael Haydn, and Franz Schubert were themselves choristers.

The Chapel Imperial always travelled with the Emperor. Today, touring is part of the chorister's education. Since 1926, the Vienna Boys Choir has undertaken around 1000 tours in 97 different countries; in that time, the boys have sung more than 27.000 concerts.

There are currently 100 choristers between the ages of nine and fourteen, divided into four touring choirs. They give around 300 concerts each year, attended by almost half a million spectators around the world. Motets and lieder for boys' choir form the core of the touring repertoire, as do the choir's own arrangements of quintessentially Viennese music, waltzes and polkas by Lanner and Strauss.

Together with the Vienna Philharmonic Orchestra and the Vienna State Opera Chorus, the boys provide the music for the Sunday Mass in the Imperial Chapel, as they have done since 1498. The Vienna Boys' Choir can also be seen (and heard!) in the choir's own concert hall, Muth. Three new films by Curt Faudon give a deep insight into the boys' art: Songs for Mary (2013) is a biography of the Virgin Mary in 21 motets and songs; Bridging the Gap - the Power of Singing and Good Shepherds will be released in 2015. Also in 2015, the Choir entered a long-term partnership with Universal Music - Deutsche Grammophon; the first of the joint products will be a Christmas CD.

Presented in partnership with BRAVO! Professional Performing Arts at BYU.

What is the Covey Center? The Covey Center for the Arts exists to allow its founders and supporters the opportunity to enrich the lives of our community and endow all that is good in the arts for generations to come. The Covey takes great pride in providing valuable educational and creative development opportunities for youth and families alike and features first class entertainment and art exhibits appropriate for all ages.

MORE ON THE COVEY CENTER FOR THE ARTS

THE COVEY CENTER FOR THE ARTS is conveniently located in the heart of Provo at 425 W Center Street, Provo, UT 84601. Constructed in 2007, this 42,000 sq. foot premiere performance rental facility features: